My first novel, The Work, was published by Stonehouse in November 2019.

Here are some lovely things people have said about it.

It’s called The Work but reading Maria Meindl’s debut novel couldn’t be farther from a slog. The story hovers over the shoulder of stage manager Rebecca Weir, who works for an experimental theatre company that may or may not be a cult. As the eclectic and shifting cadre of artists devote themselves to breath work and movement exercises and overly-intimate relationship dynamics, Meindl steps deftly between forms—the time-hopping but relatively traditional prose narrative is delightfully juxtaposed with personal professional websites, IMDB entries, Rate My Professor quotes, confessional emails from a character to a doctor, and more. Such tricks could feel gimmicky but in Meindl’s skilled hands these diverse forms both develop the characters and control the pace of the book, like well-placed and meaningful pauses in a swelling monologue you can’t help but get swept up in.

Maria Meindl’s debut novel, The Work, tells a decades-spanning story about the power of art to captivate, sustain and destroy.

AARON SCHNEIDER in The Temz Review

The Work is a finely sketched portrait of a specific milieu in 1980s Toronto. It finds echoes beyond its time frame in the current contexts of #MeToo, workplace politics, and the fragmentation of patriarchal culture.

The Work is a dazzling exploration of a life and love in theatre – the struggle to not only create but embody work that matters while making sure the lights stay on, the building stays upright, and everyone eats. Maria Meindl has captured the practical magic and personal strain it takes to put on a play, and introduces us to a captivating cast of characters in the process. A truly fascinating novel.

A powerful novel, one that brilliantly charts the allure of charismatic figures and the need, for better or worse, that drives us to them. Maria Meindl takes us into both the darkness and the light, in a world where the two often shade into each other almost indistinguishably.

“All her life she’d been yearning to yearn”. Why do we fall in love with the wrong people, and keep yearning for them, even when they seem to be destroying us? Why does love have to be so much work? Edgy, fast-paced and darkly funny, Maria Meindl’s The Work is a deep dive into a toxic passion and its intriguing aftermath in Toronto’s bohemian theatre scene of the 1980s. Stage manager Rebecca Weir –– strong, fearless, uncompromising and sensuous –– is ambushed by her passion for Marlin, a maverick director and founder of an avant-garde approach to theatre called “The Work”. Turns out, Marlin, too, is “work”: a moody, arrogant and emotionally abusive manipulator. Also, quite possibly, a genius. Rebecca’s obsession with both Marlin and The Work shapes her, embedding her into the wildly divergent lives of Marlin’s friends, family, lovers, collaborators, investors and enemies. The Work is a By Grand Central Station I Sat Down And Wept for Toronto’s Queen Street generation of artists. 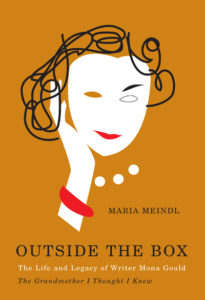 From Outside the Box: The Life and Legacy of Writer Mona Gould, the Grandmother I Thought I Knew. McGill-Queen’s University Press, 2011

At the end of the day I gathered a pile of dust from the counter of the study carrel with a wet paper towel, swept it into my hand and threw it in the garbage. The dust had sat in Mona’s various apartments and gone into the boxes when she moved, settled on top of other dust from other apartments and traveled with her to the next place. Molecules of Mona surrounded me. Her familiar smell was on my hands when I left the place. Sometimes, I found one of Mona’s white hairs. Sometimes, I found one of my own white hairs. 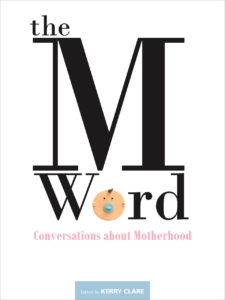 “What can I do?” my husband asked.

“Make me a doll, the most disgusting doll you can imagine. Make it freakish and hairy, and make it the size of a newborn.”

My husband likes making things. He said, “I can do that.” 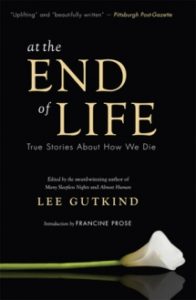 “Rules”
From At the End of Life: True Stories About How We Die. Creative Non-Fiction, 2011

I encouraged my mother to wait for my visits before taking a “walk.” I leaned over and steer her scooter for her, using the lever on the armrest. She rested her hand on my hand. Two ladies who always sat in the lounge inclined their heads together as we passed. “The daughter,” one said to another. “Very nice.” 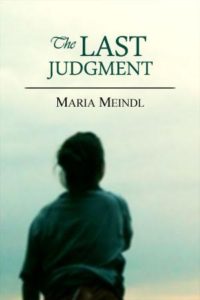 I learned about God on Yonge Street. I glimpsed a cluster of people in blue, hooded capes with silver crosses around their necks. Lightning passed through me. I drew nearer, cautiously, never looking away. I wished I could become invisible, walk into their midst without being seen. Stand amid all that blue as if standing in the sky. They were handing out pamphlets. I lost my nerve and stood watching from where they could not see me. I picked up a pamphlet from the ground. “ARE YOU READY FOR THE LAST JUDGMENT?” it said in big letters on the front page, and then, underneath: “The prophet Elijah Moses has heard the call. March 4, 1975, is the day of the Last Judgment. PREPARE YOURSELF.”